The cross-shaped church plan can be associated with the choice for a (four) division, and its mental configuration should be placed in the Second Quadrant – being the place where ideas are born. Two different types of spatial limitations can be recognized in its genesis out of the ‘idea’ of crossing lines (fig. 184). 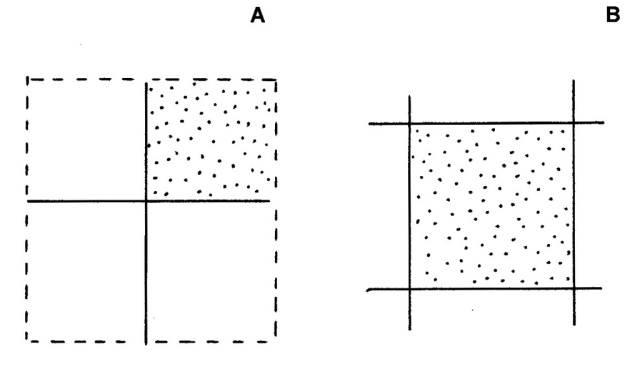 Fig. 184 – The genesis of the cross, the square and the rectangular is given here pursuant to a single or double pair of crossing lines. To the left (A) is a single pair of crossing lines in an unlimited space (the cross). This ‘open’ division can be seen as a first thinking-act in the second part of the Second Quadrant (II, 2). To the right (B) are two pairs of parallel lines crossing in an unlimited space, resulting in a ‘closed’ square/rectangle (dotted area). This limitation is a second thinking-act (doubling) in the third part of the Second Quadrant (II, 3).

Firstly, there is the open type, which is the result of two lines crossing each other rectangular in an unlimited field (fig. 184A). These lines (a single pair) are, in themselves, not sufficient to square off an enclosure (dotted area). They divide the large, unlimited field into four, smaller boundless fields. The cross is the ultimate symbol of a four division – as a ‘first division’ – and has to be placed in the second part of the Second Quadrant.

Secondly, there is the ‘closed’ type consisting of two parallel lines (a double pair) creating a square or rectangle in an unlimited space (fig. 184B).  Four lines are necessary to delimit a distinct square or rectangular part of space (dotted area) in an infinite field. This mental action of division and limitation takes place in the third part of the Second Quadrant. The use of a double (‘oppositional’) pair results in a measurable enclosure.

These two genetic types have to be kept in mind when dealing with either a cross-shape or square/rectangular ground plan (of a church). The square ground plan can have its roots either in an open field (in multitude) or is derived from a closed area (part). The former design reflects a dynamic environment, pointing to infinity. The latter ground plan is, in essence, a static composition, closing off the passage ways to further developments.

The cross-shape church plan can be divided in two main types, with many variations in between. The (tetradic) church design with equal arms is figured after the Greek cross, while a church plan with unequal arms – a long and a short axis – are called a Latin cross. The difference between the type of crosses is associated with the East and Western part of the later Roman Empire and there is sufficient evidence to make this crude division.

The Cappadocian Father Gregory of Nyssa (c. 335 – after 394), in works like the ‘Oratio catechetica’ and ‘Contra Eunomium’ posed the cross as unifier of the four mains, with equal, spatial extensions. St. Augustine, on the other hand, in ‘De Doctrina Christiana’ and the ‘Sermones’ (LIII & CLXV) put the emphasis not on geometry, but on topology of a moral and spiritual order. He distinguished four distinct and different aspects of charity. The crossbeam stands for the good works of charity. The upper vertical part of the cross gives hope for the reward. The lower part of the cross reflects longanimity and perseverance. And, finally, the foundation of the cross (abyssus et profundum crucis) points to the depth of grace.

Gerhart LADNER (1955; p. 94) remarked that the division in cross-types in a western and eastern type (Latin and Greek) had to be treated with care. Western Europe had known the existence of a ‘Pythagorean’ or ‘Hermetic’ magic and the different allegorical meanings of the cross. However, the Roman Catholic Church preferred to go for the unequal type – related to inequality and finally, associated with power. The equal  type, aiming for peace, was banned as heretic or experienced as inadequate in the search for worldly domination.

The Greek cross type was widespread, especially in the first centuries of Christianity, when the expression of worship rather than power was the main objective for building. The early patristic world was one of searching, mainly between different types of division thinking. The Arian heresy – starting in the fourth century AD – made it clear that the type of division thinking (and the subsequent positions of power of the Holy entities in its divided unity) was of crucial importance for the subsequent establishment of an orthodox worship. Furthermore, the association of the cross as an instrument of (Roman) capital punishment – and connected with crime – did not help to promote the symbolic function of the (elongated) cross in the early days of Christianity.

Later, that is to say, after the eighth century, the Latin cross type gradually took over. Elaboration became the name of the game in church building. The layout of a Latin cross was again the general point of departure for the ground plan when the cathedrals in Europe reached their unsurpassed heydays in the twelfth and thirteenth century. It was only in the grandeur of the elongation – both in the plan as in the spatial realization – that the cathedrals became what they are today: architectonic manifestations of spiritual power. Tetradic thinking made way to lower forms of division thinking.  The attention to the (numerological) four-fold only arose in a further realization of (visible) visibility, after the year 1200 AD.

The Scholastic scholars were seeking for spiritual knowledge, for ideas, which could convince the believers. Knowledge, especially after the Greek philosophical works became available, could provide the mental building blocks for a Christian belief. The balanced four-fold declined in this process of increasing materialization. Only thinkers like Averroës (1126 – 1198) and David of Dinant (early decades of the thirteenth century, writer of the ‘Quaternuli’, little notebooks) tried to keep the candle of spiritual equality burning – against much opposition.

The last ‘struggle’ between the Greek and the Latin cross took place in the year 1520, in the aftermath of the Renaissance. Then a sharp conflict arose whether the ground plan of the Saint Peter Church in Rome should remain in the form of a Greek cross, or that the nave should be extended to  form a Latin cross.